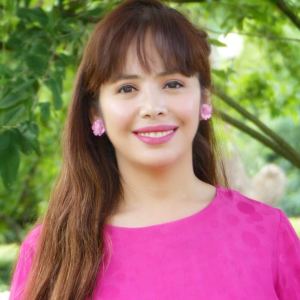 Living in the UK far from family and friends back home has made me pine for the Philippines.  During the month of August, while the Philippines celebrates “Buwan ng Wikang Pambansa” (National Language Month) and “Buwan ng Kasaysayan” (History Month), I immersed myself into various talks, workshops, and seminars about Filipino culture. Due to COVID-19, all those events were online.

A workshop that stood out and left its mark on me was “Mga Tala ng Alaala: History & Anatomy of Basic Baybayin” organised by London Filipino Centre CIC, Baybayin Buhayin Inc., and YAPAK London. I found out about the Baybayin workshop from our Filipino Association of Gloucestershire President Raymond Padilla. He sent us a Facebook message inviting us to avail of the free workshop. As soon as I read the details, I registered for the workshop. 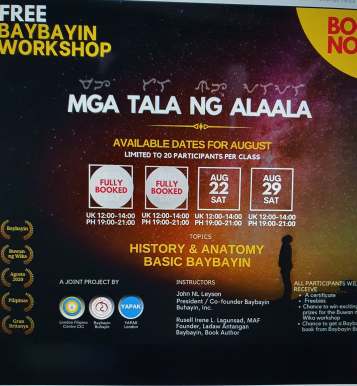 Registering was easy. I only had to choose which Saturday to attend the virtual workshop: August 8, 15, 22, or 29. I chose the August 15 one while I filled up my details: name, email, phone number. I also answered their questions: why did I like to learn Baybayin and how did I hear about YAPAK? When that was done, I clicked on the register button.

I received an email about my booking. There was also an invite to join Baybayin workshop group on Facebook where the virtual workshop was to take place. On the email it also gave more information about the workshop. It mentioned that by joining the Baybayin workshop I would “learn about the history and nature of the ancient Philippine script; recognise identity and appreciate its value”—all at the comfort of my home! 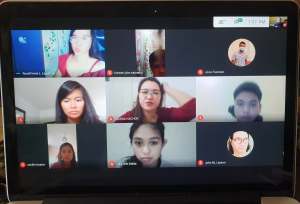 On the day of the workshop, I went to the Baybayin Workshop Facebook Group. I virtually attended the workshop live via StreamYard app. Attendees came from different parts of the world. At first there were introductions given by Junart Kim Nieva of London Filipino Centre CIC, Mikki Macabangon of YAPAK London, and the “living legend” who brought Baybayin to life who is luckily in the UK, John NL Leyson of Baybayin Buhayin. 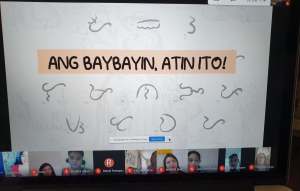 According to John NL Leyson, he aims to make Filipino culture rich. He wishes to achieve this by bringing Baybayin back to life.  To do so, he enumerated the ways 1) Advocacy-to preserve and protect Baybayin 2) “Batas” or Law- Pass a Baybayin Bill to Philippine Congress, which has been approved after eight years, now in the senate 3) “Kasaysaysan at Kultura”- to study history and culture at 4) “Disenyo” or Art- as visual art is important

When John arrived in the UK, Baybayin Global was launched. He mentioned it was for those who are second generation Filipinos who grew up outside of the Philippines or our countrymen who married Non-Filipinos. They also organised lectures and workshops in London, Gloucester, Birmingham, and the Philippine Embassy, UK.

John shared that when he visits a place, he also explores its history. Through researching John found out an interesting fact: our Philippine National Hero went to the UK from May 1888 to March 1889. As it turned out, Dr. Jose Rizal gathered materials at the British Library for his research on old history of the Philippines before Spanish colonisers came. Dr. Rizal studied the book “Sucesos de las Islas Filipinas” (Events in the Philippine Islands) by Antonio de Morga among others. 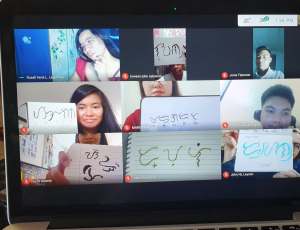 John also gave us a short history lesson and told us about a “cultural genocide” that happened in the Philippines from 1600 to 1699. He said that it was a dark history of the Philippines that erased our traditions, values, literature, language, and as a result of that even Baybayin died. He noted that the Spanish as colonisers erased previous culture of Filipinos so it was easier to make them into “slaves”. As Virgilio Almario’s quote “If you have no memory of your past, it is easier to make you a slave, especially if the colonizer replaces your memory with a new memory, through their education and the idea that they are superior.” Filipinos were highly civilised even before Spanish occupation. Due to cultural genocide, Baybayin was forgotten and has only recently been rediscovered.

So what is Baybayin? Baybayin is an old system of writing in the Philippines and according to John it is easy to learn. He guided us on how to write in Baybayin. I learned that the ancient script is a syllabary writing system with 3 vowels, 14 consonants and 17 syllabic characters. It has diacritical marks. Baybayin is used in local languages/dialects in the Philippines. To write in Baybayin, it has to be translated first in a Philippine language/dialect and written as it is pronounced. 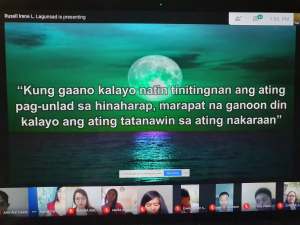 After that lecture, it was time to write words and our name in Baybayin. We were guided by a Baybayin Chart. It was inspiring to see that all of us attendees managed to write our names in Baybayin. To further our knowledge about Baybayin, we were also given a freebie, a “Baybayin 101 workbook” by our lecturer John N Leyson. To receive our certificate of attendance, we had to email our name and testimonial to YAPAK’s email address infoYAPAK@gmail.com. 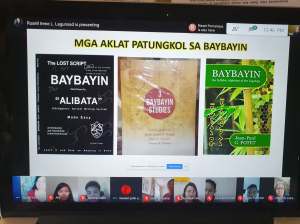 I am grateful I attended the Baybayin workshop. By attending it virtually, I did learn about the history of the ancient Philippine script. I have also appreciated the country and culture I came from even more. Even while at home, I was able to learn with other students from different parts of the world how to write in Baybayin. Baybayin is a national treasure of the Philippines. It is part of our country’s heritage. It is up to us to preserve it. I have something more to be proud of as a Filipino. Thanks to the organisers of this workshop, I can now write in Baybayin.