“I am not in a bad place. I have two rooms, a bedroom, small and cosy; and another room where I can study.” – Rizal to his family
Mabuhay!

2018 is a special year for Pinoys in the United Kingdom as it marks the 130th anniversary of Jose Rizal’s arrival in Great Britain. Yes, our very own national hero at the age of 27 set foot in the Kingdom while Queen Victoria was in throne!

From the US, Rizal arrived in Liverpool in May 1888, staying overnight at Adelphi Hotel before proceeding to the British capital, London. The grand Edwardian style hotel, still in operation today, is situated near the city centre and is just a short walk from Liverpool Lime Street station. The next time you’re in town, make sure to drop by this historic hotel and see for yourself why it was dubbed the premier accommodation in the city. Even the Beatles have stayed here!

Aside from the fact that he had to go abroad (for the second time) so he could fight better his persecutors back home, one of the main reasons why he came to England is to enhance his English language. He boarded with the Beckett Family in a house in 37 Chalcot Crescent, Primrose Hill, Northwest London. While in the vicinity, visit Primrose Hill Community Library at Sharpleshall Street (NW1 8YN) to see a memorial dedicated to the national hero. The Rizal Garden at the back of the library was sponsored by the Knights of Rizal and MACLARIZ London Chapter back in 1999.

You might remember that Rizal was romantically linked to Gertrude Beckett (aka Tottie), the eldest among the daughters of his landlord. They became close to each other as the English maiden used to assist Rizal with his paintings and sculptural works, and even prepare English tea for him in the evenings. You see, nicknames were already prominent during that time as they fondly called each other ‘Gettie’ and ‘Pettie’. Now ain’t that sweet? 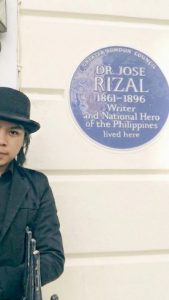 But not all infatuations lead to romance. “I cannot deceive her. I cannot marry her because I have other ties,” Rizal said to Regidor, “but I am not going to commit the indignity of placing passion over the pure and virginal love she might offer me.” His main task and top priority during his stay is to copy, analyse, examine and annotate the rare book Sucecos de las Islas Filipinas, written by Antonio de Morga, kept in the British Museum (former British Library). Morga is a Spanish historian and man of law whose book inspired our young hero to explore about the state of his beloved Philippines before the colonial conquest. Our hero’s love of country emerged victorious over personal feelings as he became passionate about the rich and diverse culture of the ‘pearl of the orient’ during pre-colonial era. In present day, I’m happy to see that Filipinos here both naturalized and overseas workers make efforts to impart and showcase our own tradition and culture to the British community through various events. Kudos to that!

You can’t leave London without visiting the British Museum in Bloomsbury, one of the world’s top repository of knowledge on human history, culture and artefacts. I can still remember the very first time I set foot there few years ago, a couple of hours surely wasn’t enough! While marvelling at the wonders that the museum offers, why not pass by the Reading Room in the center of the Great Court? During Rizal’s time, a special pass was needed to enter; much like Hogwarts Library’s restricted section! He was able to secure a reader’s pass through a man of authority, Dr Reinhold Rost, a friend of Ferdinand Blumentritt. Dr Rost is the man who gave him the title ‘Una Perla de Hombre’ (A Pearl of a Man). We see the power of network and connections! Notable readers of the Reading Room include Karl Marx, and novelists Arthur Conan Doyle (Sherlock Holmes) and Bram Stoker (Dracula), among others. The best part about visiting the British Museum? Admission is free! http://www.britishmuseum.org

Now from Northwest let’s go towards the east… the Whitechapel murders! Speculations have been made that Jack the Ripper, with the same initials as our hero J.R., are one and the same. Crazy I know. But for one who doesn’t know much about Rizal, the hearsay could ring some truth to them by linking his being a doctor to the surgical method used by the controversial criminal to kill the victims. But come on guys, wasn’t he busy annotating Morga’s book during those times? And just why on earth would he do such heinous crime? https://www.jacktherippermuseum.com

It was in London that Rizal wrote the famous ‘Letter to the Women of Malolos’, in which he showed appreciation and support to the courageous Bulakenyas campaigning for education, as well as his first ever article published in La Solidaridad, ‘To the Filipino farmers’. Both were written in 1889. With all these great works done in a short period of time, we can all agree that Rizal’s stay in the United Kingdom, though brief, was purposeful and fruitful.

An Asian who have also experienced the infamous ‘four seasons in a day’ culture shock most OFWs can relate to… If given the chance, I wondered if Rizal would have chosen to stay a bit longer in the British capital; the prospect of a better life with a better government, better economy… not just for himself but for his family. I wondered if he chose to marry Gettie and settled down here, turned away from all the sufferings and sacrifices he had been enduring and causes he had been fighting for… would things have come out differently?

In the summer of 1888, Rizal wrote to Blumentritt, “If I were a free European, I should now be married and have a family, and could live at the side of my parents. I would dedicate myself to science and, in the company of my friends, in peace and tranquillity, enjoy this beautiful world. If you only knew how I envy the meanest clerk in London!”

And yet, amid all the possibilities, he chose to continue the fight for his countrymen, his one true love. Now that’s a hero worth respect and admiration – with or without the overcoat. Cheers! 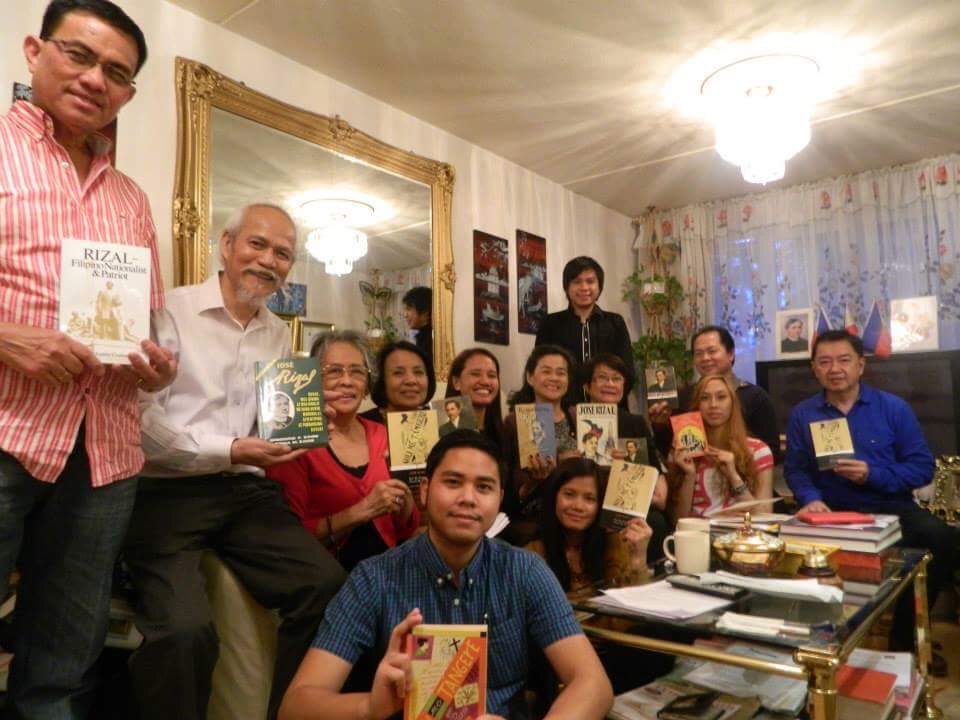 *As part of the Rizal in London 130th anniversary commemoration, the Knights of Rizal and Ladies for Rizal Inc. London Chapter UK will be hosting a ‘walk tour’, visiting sites and taking in sights related to the Philippine national hero Jose Rizal in particular and of the Philippines in general. Like the Facebook page ‘Knights of Rizal London, United Kingdom’ for information and updates. You may also email the Area Commander Sir Alfonso Taguiang, KGOR at taguiang.alfonsoaurea@gmail.com, or London Chapter Commander Sir Elija Villanueva, KCat elijahpaulvillanueva@gmail.com for inquiries about the Order of the Knights of Rizal, United Kingdom.