If the sea and anything that’s maritime is ever mentioned in the United Kingdom, the name of Southampton will always surface. This thriving borough in the county of Hampshire, South England, will always make locals feel contented and tourists refreshed. 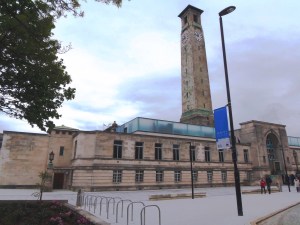 I decided to go for a day trip to Southampton to learn about its rich historical contribution to the country. Handed with a pocket guide and itinerary in mind, my parents and I made our way to Central London early morning where we will take our ride. It was an almost two-hour trip from Victoria Coach Station and so we arrived at around nine in Southampton Harbour Parade. As it is early Sunday, only a handful of people can be seen in the streets. We roamed around nearby places such as the BBC South, Civic Centre, Guildhall, City Art Gallery and Central Library. Unfortunately, they are all closed. We went back to the coach station and had quick snack in the terminal.

The Sea is History

Our first stop is the latest establishment in Southampton – the SeaCity Museum. This educational building with unique architecture was built in commemoration of the centennial anniversary of the sinking of RMS Titanic on April 1912. 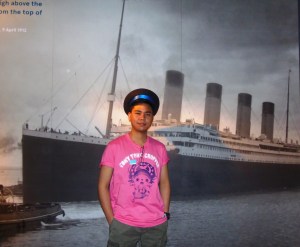 The ‘unsinkable ship’ made it here all the way from Belfast, Northern Ireland as it is where majority of the passengers boarded. In this museum, one can see and somehow feel what it’s like during those days. Some of the things that can be found inside are artifacts recovered such as diaries, clothes and jewelries. There is also this pocket watch said to be owned by a steward which stopped at the exact time it was submerged in the water. There are also interactive screens and video presentations which makes any visitor really engaged in the story. As the 1912 Bishop of Winchester once said, “Titanic, name or thing, will stand as monument and warning to human presumption”.

It is important to note that it’s not all about the people and its relation to the luxurious ocean liner’s tragedy. There is another room that features Southampton as a gateway to the world, tackling the first inhabitants, tools and equipments, new settlers down to the present populace.  It is truly an ideal place for the curious minds and responsive hearts – exhibitions that no visitor should miss!

The museum is open every day for all people to see, learn and enjoy.  Photography is not allowed inside though. It has a café called The Galley and Stores for specialty Titanic souvenirs. www.seacitymuseum.co.uk is the website for more information.

At around half past eleven, we left the museum and headed to Above Bar Street, our starting point for the QE2 Mile. QE2 Mile is a boulevard that starts from the West Park, passing through the Cultural Quarter, Old Town, and culminates at the Town Quay. Truly, the best way to explore a place is through walking! 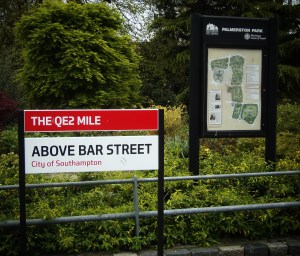 At the beginning we saw the Cenotaph, tall monument for those who died during World War I. Along the way we saw Southampton Solent University Conference Centre, and big malls such as The Marlands Shopping Centre, and West Quay – with over a hundred shops inside – on the right; on the left side are the East, Palmerston and Houndwell Parks, all in in its glory. How amusing to know that university students are actually in a shopping district, surrounded with serene open areas!

Further down is a variety of shops and restaurants both familiar and novel to Londoners. From afar a stunning stone wall built during Norman times known as the Bargate Monument stand in the center, and passing through the archway means leaving Above Bar and entering the Old Town. If coming from the docks, it is the gateway towards the city. It is like a divider between the modern and medieval. Once known as a defense town, Southampton is actually a walled city, and the Bargate is a part of bigger walls surrounding the area. Much like Intramuros in the city of Manila I would say. We went further and saw the Holy Rood Church ruin which stands on the right. The church is one of the original churches and was terribly devastated during the Southampton Blitz. Today, it serves as a memorial ground for all those who died in the war especially to the Merchant Navy and in the Titanic tragedy.  Afterwards we headed to the Town Quay where we finally saw the ports and felt the sea breeze. At around one we decided it is time for lunch and so we rode a free bus back to the high street. We ate in one of the Chinese buffet restaurants and met some ‘kababayans.’ It was good to know that there are a lot of Filipino nurses working at Southampton General Hospital. With feet rested and tummies satisfied, we went back on track of the QE2 Mile. The other stone walls especially in the castle way never failed to amaze me. We actually crossed what I may call a pedestrian wall-turned-bridge where a statue of Medieval Southampton mayor John Le Fleming stands overlooking the street. 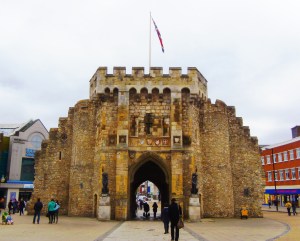 In The Old Town

The next main attraction that we visited is the Tudor House and Garden built by John Dawtrey in 1492, passing through a mural in Hamtun Street which depicts the city’s industrial heritage. Tudor House and Garden probably became famous because of the variety of people that occupied it. Lawyer Lord Lister and Bonnet-maker Eliza Simmonds are just two of them. Inside, visitors can learn about the lives of the tenants through specialty posters, displays and interactive screens. There are also exhibits and educational rooms suitable for the whole family. The ground floor consists of a souvenir shop, the Victorian Kitchen, Tudor Kitchen, café, and access to the Tudor Knot Garden; first floor include special rooms and the cellars where visitors can go down the dungeon-like air-raid shelter, a refuge during the blitz. Probably one of the amazing tools found inside is the Guida Rotate, a state of the art technology which allows people to see through the house’s history in the different periods! 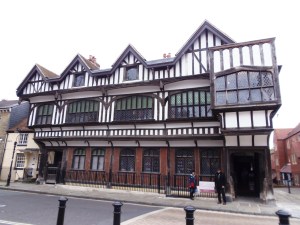 The Tudor Knot Garden is another highlight with beautiful shrubs and topiaries. Truly perfect for a morning coffee or afternoon tea as the café is adjacent to this backyard. Beyond the garden is an archway that leads to a narrow walkway. On this site one can see a good view of the city from afar, and overlook at a wide open space just below the house itself that is the remains of an old stone-built house known as King John’s Palace. This isn’t owned by a king however, but by a merchant named John Wytegod in the 1300s. Before it came to its present state, it has been a coach house and stable. We then left the historic residence-turned-museum at around 4 o’clock and headed back to the sea ports. 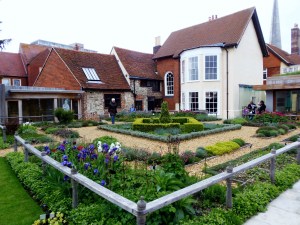 As we walk we saw the oldest building in the city, St. Michael’s Church, which lies just in front of Tudor house. It is one of the original five churches that served in the borough during earlier times alongside Holy Rood, but now it is the only one active. 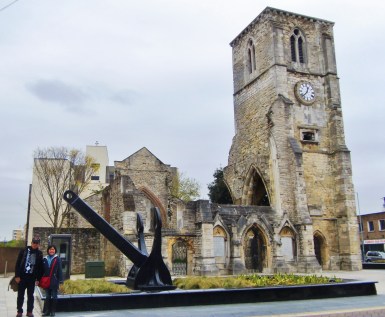 Far Across the Distance, and Spaces
We savored moments in the Town Quay, and even at that time that sun is still high. I am just so glad to note that I have finally reached this historic waterfront – Titanic’s departure point before its ill-fated voyage. There are lots of yachts docked and ships are stationed from afar. Just as Dover is close to France, Southampton is the popular entry point to East Cowes, Isle of Wight. No wonder it is dubbed as an ‘International Maritime City’. We made our way back half an hour early to the National Express coach station in Harbour Parade and patiently waited for our return to London.

The borough of Southampton that is both culturally and historically rich is a place for people who enjoy a mix of shopping and sightseeing – close to the waters. So what else is there? Aside from the newly-opened SeaCity Museum and Historical Tudor House and Garden, you may also spend time on other attractions such as The Medieval Merchant’s House, Solent Sky Aviation Museum, Ocean Village as well as loiter on various docks; guaranteed no pirates at bay! If you only have a day, it would be best to join a walking tour (visit www.stga.org.uk) for a total immersion to the city’s heritage and culture. For the more courageous crew, try the ‘ghost tours’ of the Old Town at night. It may not look it, but Southampton is actually one of the best places to shop in England. Find both familiar and unfamiliar stores, boutiques and restaurants at malls such as The Marlands, West Quay Retail Park and Bargate Shopping Centre. A mini-cruise along the Solent is a good idea too!

Avoid visiting the place during winter season as it is a coastal area. Best time to go is during the warmer months June to August, and the city centre becomes livelier during September due to many events that take place during that time. It is unadvisable to go on a Sunday because the Visitor Information Centre is closed as well as some stores shut early.

A day is surely not enough to contemplate all the significant that lie therein. And from here, the so-called cruise capital of northern Europe, our hearts will go on. 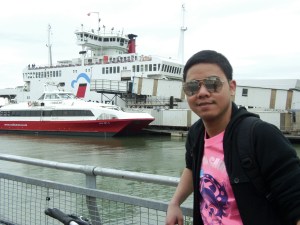 Visit http://www.visit-southampton.co.uk for a wider range of information about the place.