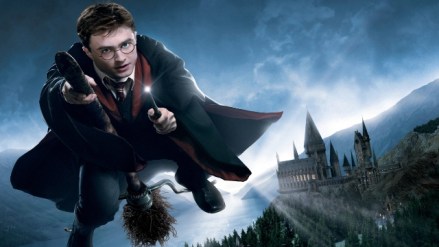 The appeal of Harry Potter cuts across all ages, gender and nationalities because it is brilliantly imagined and penned. It is spell-binding, magical, engaging, humorous and leaves you with a sense of wonder through all the events and adventures Harry is caught in.

The universality of emotions draws children and adults alike.
Everyone  wants to be somebody, old and young alike and Harry is a symbol of one who wants to excel in something. And he did excel in being the best Seeker of the century in Quidditch. He has discovered something he can be good at. Everyone, simply everyone is like that.

People want to be accepted, belong to a circle of friends. Harry found staunch friends in Ron and Hermione and he has a special friendship with Albus Dumbledore.

It touched me when Hermione cemented her friendship with Ron and Harry, all because they saved her from a twelve-foot mountain troll. I was touched when Granger threw her arms around Harry and muttered: Books! And cleverness! There are more important things—friendship and bravery… Everyone wants to be brave and Harry is courageous.

The friendship factor is the one that touched me all the more. I was touched by Neville standing up against his friends because he didn’t want them breaking more rules and being vindicated in the end by Dumbledore. “It takes a great deal of bravery to stand up to our enemies, but just as much to stand up to our friends. I therefore award ten points to Mr. Neville Longbottom”. Moving indeed!

Malfoy is mean, a bully and Harry told Neville that he is worth 12 of Malfoy. Malfoy lets no chance pass in mocking Neville that he is devoid of brains and so is even poorer than the Weasleys. In life, we encounter meanies. Our encounters with them bring out the sadness in us, shade our existence but Harry and his bunch of friends give us great examples of valor.

This wonderful work of art is peppered, loaded with nuggets of wisdom. You read a line and it resonates deeply with you. You marvel at the insight it leaves you and you wish that you were the one who wrote those lines.

The first book came out in 1997. I read it two years after and was captivated by it. This in turn led me to join Hogwarts Philippines. Harry Potter is not just a book. I grew older with it. I was one of those who lined up bright and early to get my copy of the last book. I figuratively linked arms with those who were equally enamoured with the series. It has been an emotional journey, I rose at their victories. I fell at their low moments, death and other staggering moments.

No, Harry Potter is not just a book that one gets over with if you please. It is a phenomenon. It stays with you. It certainly stays with me. The word “Always” makes me shed tears. Harry and the other characters are well-rounded characters and you grow with them, you simply cannot help but celebrate their victories and grow glum with their despondent moments.