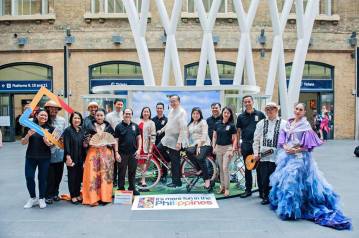 The Philippine Tourism Weekend (Experience the New Exotic) at the Potters Fields Park on Aug. 27-28 will be the grandest “It’s more fun in the Philippines!” consumer event in London.
In the late 90s, we had the Ph Tourism Ball at the British Museum of Mankind to celebrate the exhibition of Ifugao culture including a genuine and specially flown in Ifugao hut. The event was truly epic specially with the Banda Kawayan providing the orchestra for the dinner dance. The music reverberated throughout the halls of the museum. It was simply magical, and creepy too…I had cold feet dragging myself for a toilet break!

This was part of my first ever project -World Travel Market (WTM) in London for PCVC. I handled the European and North American Market for 10 years before I transferred to DOT for overseas posting. At last year’s WTM, we had a hip concert party at the apex of The Gherkin, a glittering egg shaped glass building and one of the most prominent skyline eye catchers in London. This year, we had big consumer promos in major train stations in London (viral video with more than 1.2M views)!

We’re planning to have also a Ph Happy Hour segment to be conducted simultaneously in some of the most popular pubs / bars in London. Pub is very much part of the British lifestyle. According to dailymail.co.uk, “the Brits spend £15 billion every year getting tipsy, either going out or staying at home, and they drink far more beer than wine at the pub. Almost £30,000 is spent on alcohol a minute in Britain in pubs, restaurants, supermarkets and off-licences.”

What a chore for me!

But this event at the Potters Fields Park is the centerpiece of our iconic landmark domination in London. It is literally in a central location where you could see a panoramic view of the Tower Bridge, the Tower of London, River Thames, the Gerkhin, the glass dome of CityHall, HMS Belfast, etc. Many exciting and unique events have been presented or staged here (including this crazy running weird challenge https://m.youtube.com/watch?v=qXyBb0kKfmI)! 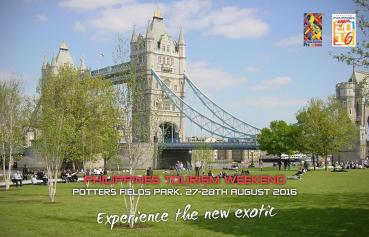 The Ifugao hut I mentioned was already shipped back to the Ph…too bad. But watch out how we would make a nice Ifugao cultural display panel there. Hmmm…build our own rice terraces? You will have to come and surprise yourselves! You may even see the real or virtual Pokemon cast doing a trumpet dance. Ooops…too much for a sneak preview!

To all our kababayan in UK, come and bring your family and British friends. Show them the Pinoy pride and let them experience why it’s more fun in the Philippines.

Luck visitors may win some Ph tourism souvenir items and other goodies but the luckiest pair may win a free all-inclusive vacation to the Philippines including round trip tickets from London to Manila on Philippine Airlines.

See you all at the Philippine Tourism Weekend 2016 at the Potters Fields Park by the Tower Bridge in London this August 27-28. Mabuhay ang Pilipinas!